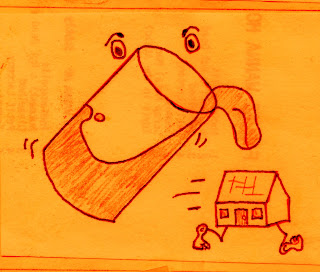 As far as the other seven (7) tracks on the record, in the spirit of Andy Kaufman apologizing for Heartbeeps on Letterman, I sincerely apologize for releasing them.  As I go back over the old tapes for this website, I can see that this was the start of a bad stretch of releases for the band.  While every record 1994-1998 (also called the colored-cover cassette era) has good songs, there are also downright bad songs on pretty much every one.

Lost sight of quality control.  Still, there are good songs, mixed in with the junk, in the colored-cover cassette era. Also, the split CD LP with Runaway Weiner Dog came in 1996 (see link at right side of this page), smack dab in the middle of the musically-troubled colored-cover cassette era, and that record is just fine, does not have any bad tunes, and is the best of all the 1990s FWM releases, in my opinion.
Subtly Ridiculous fun fact:  This was the first FWM record to be mentioned on the internet.  And, of course, the internet never forgets.