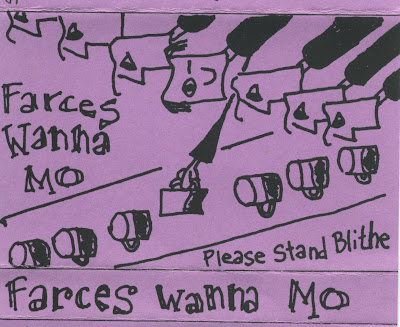 This mildly fun ep is marred by a cringeworthy lead-off track and the bad production typical of the colored-cover cassette era. Still, the other 7 songs are decent, and the they have a spontaneity that looks back to the earliest days of FWM. The last song, "The Good-Bye Party" (with Jeff Yih on guitar and Dan Rust sharing vocals with me) is really good in a unique, but distinctly Farces, way.
"The Good-Bye Party" is also notable for being the band's last song while I still lived in the San Francisco Bay Area, recorded at a going away party celebrating my upcoming move to Cincinnati (where Please Stand Blithe was mixed and released).
Returning briefly to the bad production, this was mostly because I spent 1994 to 1997 feeding all the tracks (vocals, drums, everything) through guitar effects. If you are in a band: don't do that!
This quickly-assembled ep is sort of blueprint for the much more deliberated and deliberate 2003 Farces LP called If Not Why Not? (link over at right hand side of the page). From here to there, everything is working up to that apotheosis in one way and another (usually something to do with musical development). However, this ep, Please Stand Blithe, established the ethos, or 'tude or whatever you want to call it.

All things considered, I like this record. It pulled Farces out of the trainwreck of Not Cal Not Local, it's short, it's funny and it presages better Farces to come.